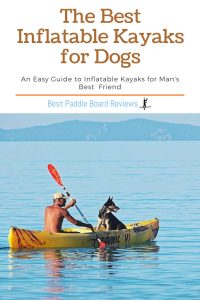 Dogs are the best. They protect, they retrieve, they bark, and they snore. And if there’s one thing we also know, it’s that they hate to miss out on the fun. Have you ever played a family outing on the lake or river and struggled to find someone to watch your dog or leave him or her at home?

Wouldn’t it be great if there were a safe, reliable, and great way to bring your dog along on the kayak? Well, it turns out there are a number of kayaks out there that offer just that. To get started, you need to understand why this has become possible, and it’s all thanks to the rise of the inflatable kayak.

An inflatable kayak is just what the name says: a kayak that can be inflated and deflated before and after use. They are made with drop-stitch technology, which enables small fibers in the fabric to bind together to create an extremely strong and durable kayak.

There are many benefits of an inflatable kayak as compared to a traditional hardshell kayak. They are obviously easier to transport and easier to store as they can be reduced to such a small size. Moreover, they are much cheaper than traditional alternatives and can be used for kayakers of any skill level, including dogs.

What to Look for When Buying an Inflatable Kayak for a Dog?

Material of the Kayak

Let’s be honest. You’d be asking a lot of your dog to sit still and quietly in the kayak. Therefore, you’ll want to look for one that can handle the sharp claws and abundance of hair you’ll amass on the kayak. Most inflatable kayaks are made with drop-stitch technology, which helps with this immensely.

Stability of the Kayak

One of the drawbacks of many inflatable kayaks is a lack of stability, so you’ll want to be sure that you find a kayak that will keep from tipping as the dogs moves around, as well during the process of getting on and off the kayak.

Space in the Kayak

Inflatable kayaks often come with removable seats, an important dimension to consider when choosing a kayak in order to accommodate your dog as well as your other gear.

Be sure to consider the weight limit of your kayak. Most inflatable kayaks advertise limits of around 200-250 pounds.

Tips for Kayaking with your Dog? Don’t Tie Your Dog to the Kayak

Practice in Short and Shallow Trips

Practice Getting In and Out in Deep Water

How to Kayak with Your Dog

The Best Inflatable Kayak to Bring Your Dog on the Water

Summary: The Intex kayak is perfect for easy, recreational paddling and comes with 2 seats. Its bright yellow colorway makes it extremely visible in the water.

Pros: has a maximum weight capacity of 400 pounds, so there is plenty of space for a dog

Click for the Best Price for the Intex Kayak

Summary:  The Intex Kayak is also great for shallow water kayaking and is made with puncture-resistant vinyl, which will thwart the effort of your dog’s sharp claws from puncturing the kayak.

Pros: has 2 removable seats as well as 3 separate air chambers (most kayaks only have 2)

Cons: some users complained of difficulty inflating and deflating

Summary: With an 18-gauge PVC, a thick tarpaulin bottom and a tough nylon cover, this is a great kayak on the river, specifically if you want to take your pup fishing.

Cons: users complained that the air chambers deteriorated after light use

Summary: The Aquaglide offers unprecedented value as it includes 3 seats and can withstand up to 550 pounds of weight. You could more than one dog aboard if you’d like!

Cons: one user complained that the backrests of the seats did not provide adequate support

Summary: Like the Aquaglide the Sea Eagle inflatable kayak is among the largest in the market, weighing only 32 pounds but capable of withstanding as much as 650 pounds of weight.

Pros: unlike other kayaks, the Sea Eagle includes 2 skegs underneath the kayak for added control and maneuverability

Cons: some users complained that the paddles were too short

FAQ for Kayaking With Dogs

Will a Dogs Nails Puncture an Inflatable kayak?

No, you’re dogs nails won’t puncture the sides of an inflatable kayak. While it is possible, the heavy duty construction and PVC material on modern kayaks are built to be puncture resistant.

How do You Get a Dog Back Into a Kayak if They Jump Out?

This is one of the best reasons to have your dog wear a life jacket beyond helping them float. Most dog life jackets have a handle that you can  help lift them back into the kayak if they decide to cool off with a dip.

Can you White Water Kayak with a Dog?

While it is possible, it’s not recommended. If you’re dog wear to go overboard in rapids it could cause serious harm or damage. Be sure to educate yourself on the class of river before taking your dog.

Does My Dog Need Special Equipment to Kayak?

The most important piece of equipment to kayak with a dog is of course the life jacket. Other than that we also like to recommend using doggy sun goggles to protect their eyes from intense sun glare off the water, especially if you do it regularly. These are relatively inexpensive and will save your pups eyes.

As you can see, there are a number of safe inflatable kayaks that can support both you and your dog. And while the kayaks will do their part, don’t forget to ensure that your dog is comfortable out on the water before venturing too far into the water.